I have been compiling on Hong Kong’s characteristic round-cornered buildings for years. Sometimes I’d go out with a plan to photograph specific buildings, other times I’d stumble across one while out and about (and infuriate companions as I’d shout “hang on a mo… need to get my phone out…”). But that’s where the photos stayed: on my phone or camera.

Earlier this year [2019] I was saddened to hear of the death of Michael Wolf, whose wonderful photography captured the essence of Hong Kong and its people in relation to the city’s built environment. He produced an entire book on Hong Kong’s round corner houses. Now, my photography doesn’t even come close to his. In fact, I feel unhappy even speaking of mine in the same paragraph as his – but seeing his photos on various online obituaries prompted to get this project finally onto the page. 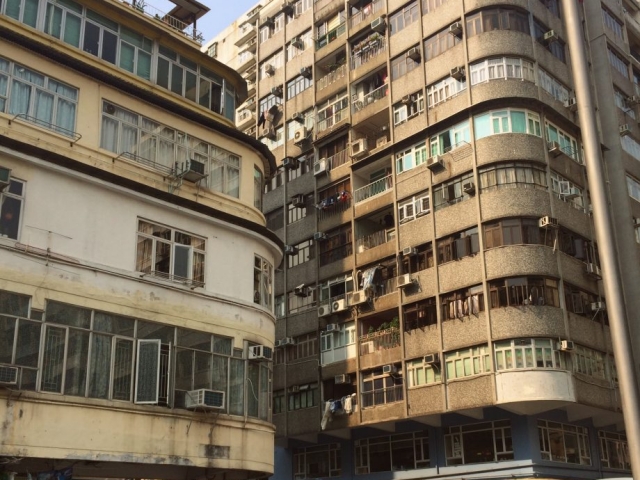 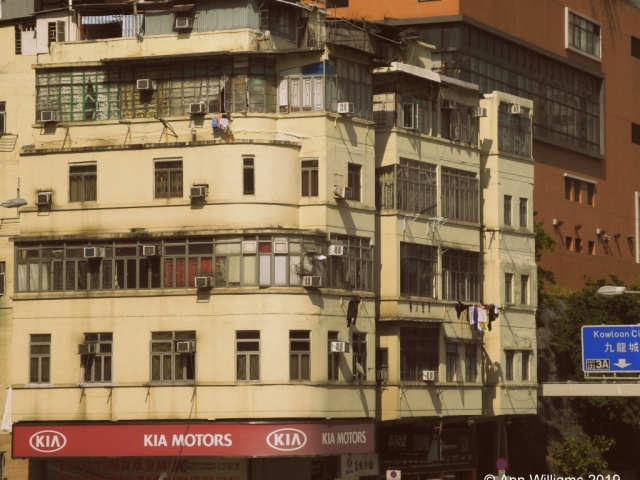 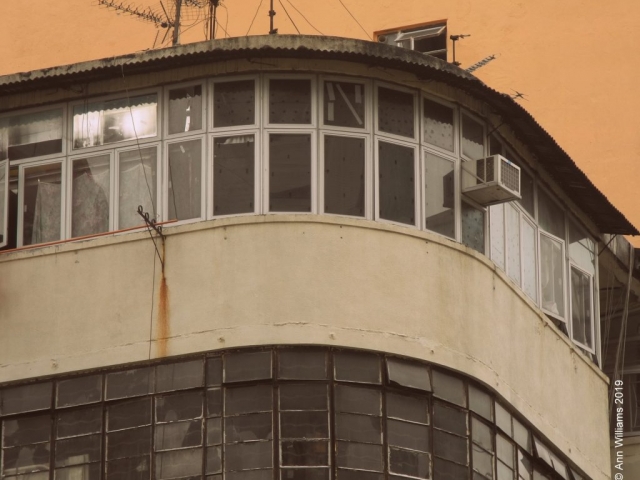 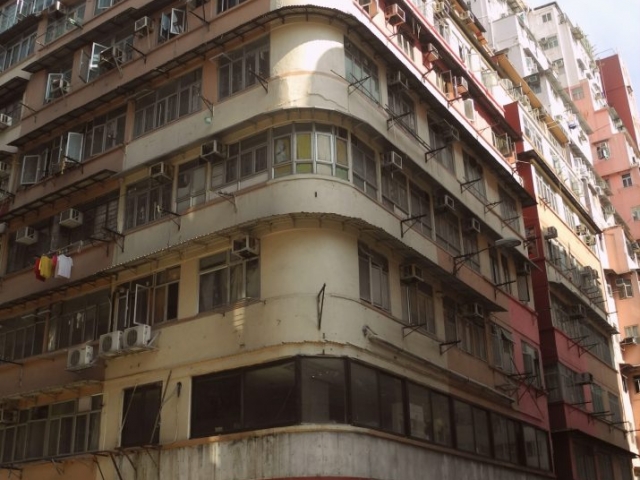 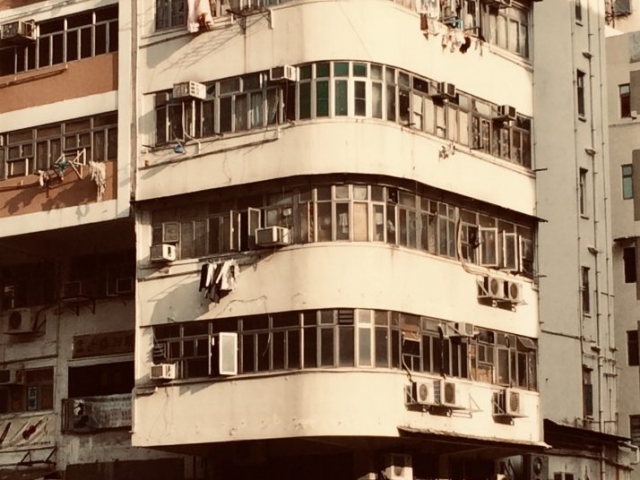 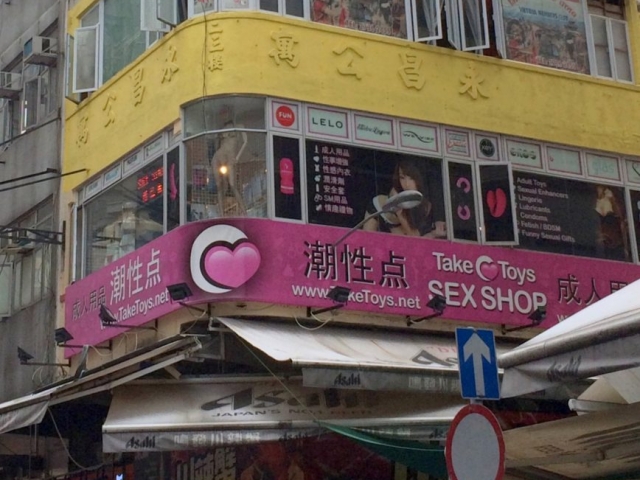 They are one of the most distinctive features of Hong Kong’s old urban areas: curved corner buildings. Most date to the 1950s and 1960s – an eon ago in terms of the city’s architecture – but, amazingly, large numbers remain. And what is even more incredible in this knock-it-down-after-20-years’ society is that some are even being renovated. 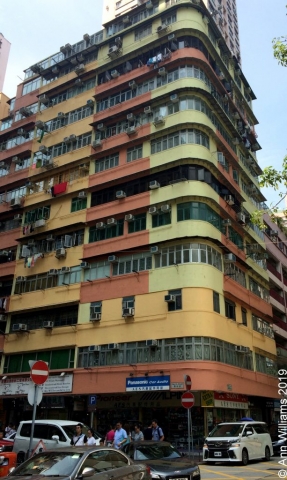 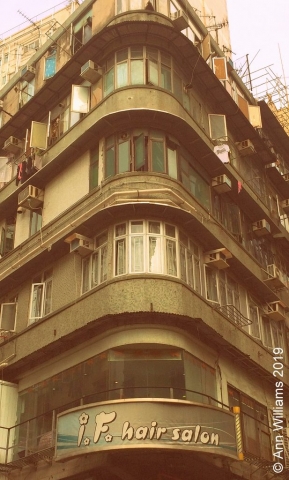 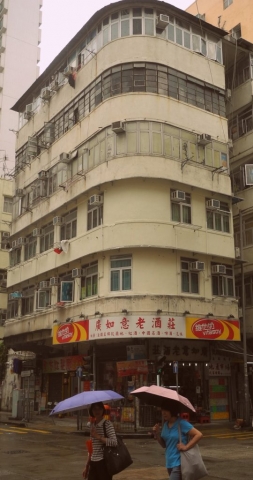 When I first set out to photograph these round-corner buildings, I headed to old areas such as Sham Shui Po thinking I’d only see a handful – but I seemed to find them on, ahem, almost every corner. Well, ok, not quite; but many more survived than I had supposed. I even found a few renovated examples. Many sport another Hong Kong architectural feature: coloured façades, particularly pink, blue, purple, yellow, pale green, bright orange or ochre, which help to emphasise those curves.

I’ve read that the curve is there to enable pedestrians to see more easily round street corners, because the buildings are set back further than right-angled structures. I’m not sure how much lines of sight are improved with this design, however, but it does mitigate the “canyon effect”. I’ve also read (from a creditable source – namely Dr Lee Ho Yin of the University of Hong Kong) that the lines are a projection of the pavements in what had originally been the verandahs of the buildings’ units. Because the balconies were not enclosed, no premium on the land was payable. Owners started to enclose the balconies to give more space in the cramped units, and this was tolerated by officials in an effort to ease the housing shortage.

Hong Kong made a remarkable recovery from World War II, when people were literally dying of starvation in the streets. A huge influx of refugees from mainland China brought in much needed labour – but these newcomers had to be housed. The population grew from 600,000 in 1945 to 2.1 million in 1951. The authorities increased the number of floors permitted to nine or 10, and introduced a programme of “composite” buildings that combined residential and business use.

Small grocery and general stores, laundries, flower shops, pharmacies, vehicle workshops, building supplies stores and cafes/teahouses were all popular activities on the ground floor, while the mezzanine floor housed hairdressers, beauty salons, slightly “posher” restaurants, and medical and dental practices. In fact, the same pretty much goes for today, but with the addition of bars in “up-and-coming hip areas”, such as parts of Mongkok, clothing factory outlets and stores selling powdered baby milk and skin whitening creams to mainland Chinese tourists.

One of my favourite round-corner buildings is Gillies Mansion in Gillies Avenue South, Hung Hom, with corners on Baker Street at one end and Cooke Street at the other (I love the coincidence of the names!). The Baker Street end is tangerine, while Cooke Street and the first storey go for dark orange. Built in 1964, it features 15 storeys and 121 units, and is quite majestic – it almost reminds me of an ocean liner.

On Google street view the Baker Street ground-floor corner is occupied by a funeral florists – sadly, this colourful store has gone the same way as erstwhile customers. The upper floors on the main façade are cantilevered out over the ground floor and mezzanine, providing passers-by with a degree of protection from sun and rain. 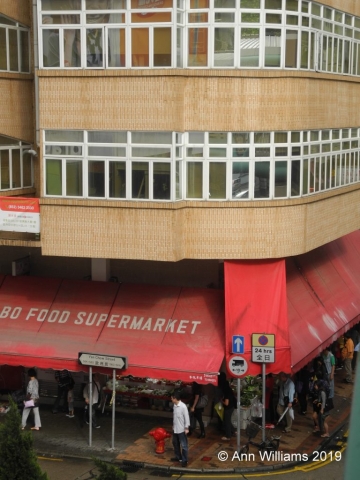 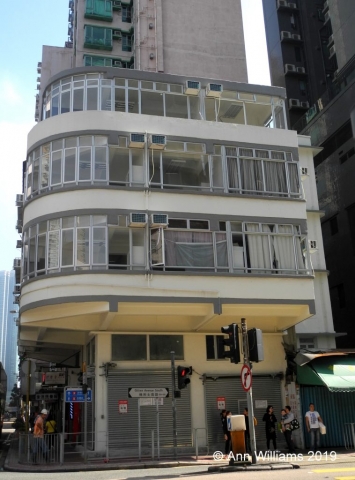 The two buildings above, one at the corner of Yen Chow Street and Ki Lung Street in Sham Shui Po, the other Gillies Avenue South and Wuhu Street in Hung Hom, have recently been refurbished – new windows, freshly painted façades, and I guess updated inside, too.

On a grander scale is the Lui Seng Chun building, of which I don’t have my own photo, but has been given a new lease of life as the Hong Kong Baptist University School of Chinese Medicine. Built in early 1930 by Lui Leung, one of the founders of the Kowloon Motor Bus Company, the upper floors comprised the family home (he had three wives), with a bone-setter’s shop on the ground floor.

It is located on Lai Chi Kok Road Street, Mongkok, and is an example of the pre-WWII “kee lau” Chinese tenement style. The four-storey structure features granite columns, neoclassical decorative balustrades and a “broken” pediment. Interestingly, it is not located on a right-angle corner, but on a narrower apex, giving it a more prominent position. (If you look on Google street view, as at publication date, the building is still shrouded in netting with bamboo scaffolding, undergoing its renovation).

The family had all moved out by the 1980s, Mr Lui having died many years earlier, and it was empty and dilapidated. The family donated it to the government, and it was designated a Grade 1 historic building, and redeveloped under the revitalisation scheme. This renovation project shows what can be done when owners and authorities work together, plus it is good to see that the new function is related to the old, rather than converted into a pricey, up-market restaurant or boutique hotel.

The Chi Residences on Nathan Road, Jordan – an “apartment hotel” – looks to be a rebuild of an earlier, lower, structure. Like many of the other buildings here, it gives the appearance of a block placed on top of a platform of a smaller footprint (there may be an architectural term for this, but I’m not an architect… please enlighten me if you can!). In crowded Hong Kong, this helps increase the pavement area without limiting floor space, and also brings a measure of protection against sun and rain – welcome in this sub-tropical city.

… but not for all

It’s not all good news, though. This beautiful example of a pre-war round-cornered building is sadly facing demolition. The owners don’t care about heritage and the Hong Kong government doesn’t have the teeth (or the passion) to pursue ways to preserve it and give it a meaningful future.