Indian households love to hang decorations over their front doors, and at their windows, too. Called toran, these Indian door hangings bring good fortune to the house and everyone in it, including visitors. The word toran comes from the Sanskrit for “archway” or “gateway”, and in architecture refers to Buddhist temple entrances composed of two posts and a lintel in either stone or wood.

Toran are especially popular during the Diwali festival, but many people maintain the tradition year round.

A lime tied on a string along with several chillies and hung over the doorway keeps Alakshmi from entering one’s house and wreaking mayhem. Alakshmi is literally the opposite of Lakshmi, the goddess of fortune and prosperity; in fact she doesn’t even have a proper name, she is simply “not Lakshmi”. She’s the anti-heroine, and is actually Lakshmi’s sister. Not surprisingly, she’s the ugly one, with shrivelled skin. Oh, and she rides a donkey. The chillies and limes keep her out of your home by distracting her, because she cannot resist the sourness and heat.

Simple toran called nimbu mirchi are made from long, slender mango leaves and colourful marigolds. Buy them ready made, or string up your own – these are hugely popular around the country. Why mango leaves in particular? It’s not because of their elegance, but because gods including Vishnu reside in mango trees, thus they are sacred to Hindus. On a practical level, people feel a meaningful connection to the trees because of medicinal benefits of the leaves. 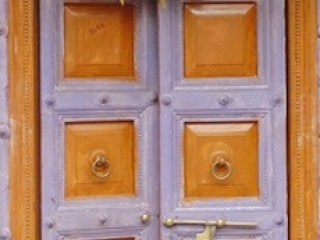 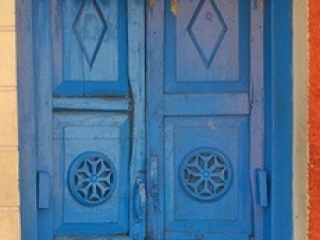 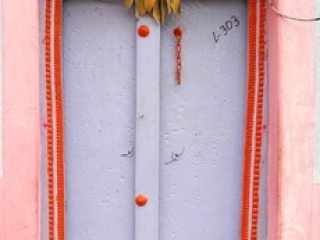 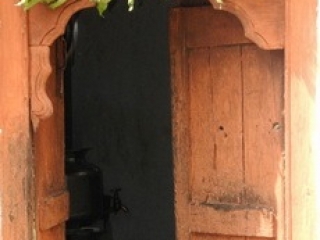 Garlands of marigolds – sacred in Indian culture – can be made up into toran, just as the example below from a railway station manager’s office. Perhaps he is hoping the charm will help the trains run on time, or that passengers won’t be angry with him if the trains are late.

Marigolds are ubiquitous in India. You can’t walk through a street market without seeing the yellow, orange and white blooms piled high in baskets or ready-made into garlands. And, yes, they are considered sacred. The flowers are particularly associated with Ganesh, and Lakshmi always appreciates them. The three colours of the marigold all have significance in Hindu culture: white for purity, yellow for knowledge, and orange for courage.

More elaborate toran are fashioned from fabric and embroidered with traditional patterns, and look similar to curtain pelmets or valences. They adorn windows as well as doors, and are used inside the house, particularly on the wall behind a bed.

This toran below looks as if it has been crocheted. The pompoms are a lovely playful touch. Note the chalk pattern on the ground in front of the door; this is a rangoli, and brings prosperity to the household. This is a simple example, and looks as if the housewife may have been in a bit of a hurry to get off to the market that morning!

Here’s another crocheted toran, this time from the city of Solapur in southern Maharashtra. I love how the colour palette of the piece has been toned with the paint of the frame.

Evil-eye symbols are incorporated into some hangings to dispel envious and jealous looks. The example below is much more than just the evil eye, though. I spotted it in a side street in the town of Kohlapur in central India, and just had to get the taxi driver to stop right there so I could grab a photo. It’s a profusion of shapes and symbols executed in a colours that perfectly complement the wall and the the door frame. Surely the best of luck will inhabit this abode!

As beautiful as many of these Indian door hangings are, they are more than a decoration. They are holistic in the way that the Christmas or Advent wreaths of English-speaking countries are not. Toran are an integral part of Hindu ritual and way of life. How many Americans or British and others know that the circle of the wreath is a symbol of eternity and rebirth? Or that the evergreen leaves represent strength? Some say the red of holly berries signifies the blood of Jesus. As with many Christmas traditions, however, wreaths have their roots in ancient practices: so perhaps they are not so far removed from toran, after all.